Local resident Clive Townley was the lucky winner of the top prize in the Swanage RNLI Lifeboat Week Grand Draw. 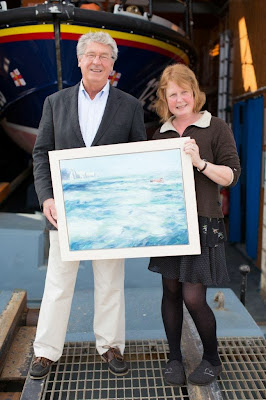 Clive was presented with the original artwork at the Swanage lifeboat station by renowned artist Antonia Phillips.

Antonia kindly donated an original painting which featured the Swanage Lifeboat for the Grand Draw. Antonia has been a long term supporter of Swanage Lifeboat and their crew, even helping the crew to create some of their own artwork in the past.

Clive, who volunteers as a boathouse attendant at Swanage Lifeboat Station was delighted to win the painting saying;

The Swanage lifeboat fundraisers, headed by Angela Morris, sold tickets during the summer and the winning tickets were drawn during lifeboat week. The sale of tickets raised more than £1500 which will be dedicated to the Swanage Appeal that is raising funds for the new boathouse.
Posted by Swanage Lifeboat at 09:37